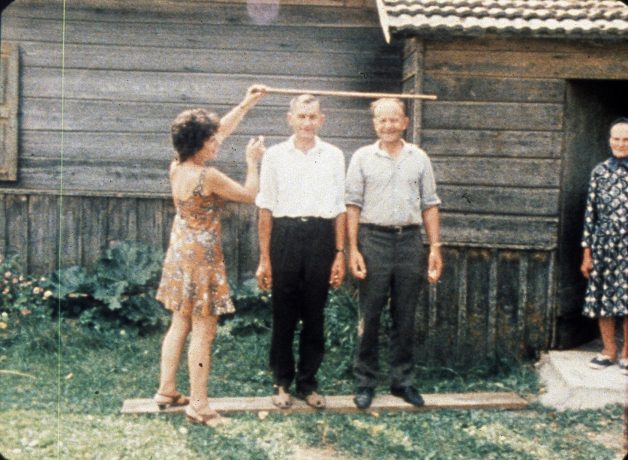 Jonas Mekas was born in Semeniškiai, a small farming village in the Biržai region of northeastern Lithuania in 1922. His adolescence was spent in his own world of literature and poetry which consumed his daily life. This peaceful existence was thrown into turmoil with the arrival of Soviet and then Nazi troops to Lithuania. Jonas and his younger brother Adolfas attempted to flee to Vienna in 1944, but were diverted by the Germans to a forced labour camp outside of Hamburg.

Following the War and several years living as displaced persons while studying in Germany, they got the opportunity to emigrate to the United States, where they settled in Brooklyn and began their artistic activities, such as founding Film Culture magazine and making their own films. Reminiscences of a Journey to Lithuania documents the brothers’ return to their home after 27 years abroad.

An exquisitely composed document of this emotional homecoming, the film is structured as a triptych, with the central section comprising “100 Glimpses of Lithuania, August 1971.” Reuniting with siblings, neighbours and their mother Elžbieta – at that time in her eighties and still cooking outdoors over an open fire – the film brings the viewer along on a tour of village life in rural Soviet Lithuania. This is bookended by scenes from New York in the 1950s and a stop in Vienna following the brothers’ time in Lithuania.

Plus/ This screening will be preceded by a video from Mekas’s 365 Days Project from 2007. The entry from 21 February is a comment on Britney Spears, shown in the newspaper days after she shaved her head.