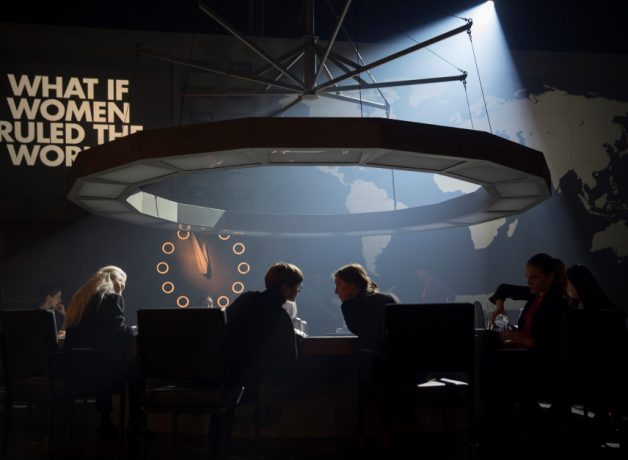 Two Minutes to Midnight features an all-women government in a fictitious country who take a stand on an imminent nuclear threat from a foreign nation.

A panel of fictional characters and real women experts in fields such as defence, law, politics and psychology is set in a democratic ‘Peace Room,’ mirroring the toxically masculine ‘War Room’ in Stanley Kubrick’s classic Cold War satire, Dr. Strangelove.

The women are tasked with deciding how to approach the pre-scripted situation. Bartana’s visionary work is the synthesis of an interdisciplinary four-year process that analyses the geopolitical power game – and presents us with an alternative to the macho power discourse.

The film was created using recordings from the hybrid-experimental live performance What if Women Ruled the World? (2017-2018) commissioned and produced as a live project by Manchester International Festival, European Capital of Culture Aarhus 2017 and Volksbühne Berlin.

This screening has been programmed to accompany Phil Collins and Oleksiy Radynski’s 3-month installation Intervention, which re-contextualises the decommissioned statue of Friedrich Engels that stands in the centre of Manchester through the perspectives of writers and activists from Ukraine.

Event/ This screening will be preceded by a recorded introduction featuring artist Yael Bartana and John McGrath, Artistic Director and Chief Executive of Manchester International Festival.

Intervention is a collaborative project by Phil Collins and Oleksiy Radynski, co-commissioned by HOME and Manchester International Festival,...