How did the project come about?

I responded to an open call for an artist to create HOME’s prize winning 2019 Manchester Pride Parade entry. I was inspired to contribute a proposal that had personal importance to me, especially as 2019 was the 50th anniversary of Stonewall, the explosive revolutionary catalyst for the LGBT+ rights movement and Pride itself. I was over the moon to have my proposal accepted, and following a meeting with the supportive team at HOME, we excitedly embarked on the four month development and creation period.

My work as a theatre maker, actor and puppeteer have provided me with a unique skillset, able to creatively respond to the commission with a concept that would both challenge me as an artist and be a theatrical spectacle in the Pride parade for HOME.

How an audience experience and engage with my work has always been a driving feature. I strive to create a shared, intimate experience between the audience and performer. I’d previously created a promenade project, Seahorse, for The Lowry Theatre that explored themes of displacement and migration using performance and puppetry in the building’s public areas. The deviation from the expected norm is something that provides a great deal of inspiration for me.

What was the thought behind the project?

As a theatre maker and performer I immediately knew that I wanted my proposal to have theatrical impact; both a celebration of Pride but also channeling an element of protest, to acknowledge the roots of the movement.

My concept referenced two landmark anniversaries in 2019: the 50th anniversary of Stonewall and the Moon landing, with Neil Armstrong uttering the famous words; “That’s one small step for man, one giant leap for mankind”. I was inspired by the parallel of human ambition and progress across these two significant moments in history, referencing how far LGBT+ rights have evolved in the past fifty years but also (and perhaps most importantly) acknowledging the work and education that is needed to ensure continued progress. This led me to envisage a space themed parade entry with the title, highlighting the LGBT+ community’s striving for equality, being an obvious play on words of the Toy Story Space Ranger, Buzz Lightyear’s catchphrase; ‘To infinity and beyond’.

The main centrepiece, a 12-foot astronaut (who we affectionately named ‘Buzz’) operated by a team of five puppeteers, waved a Pride flag as he space-walked the streets of Manchester surrounded by teams of choreographed dancers and picket carrying marchers underscored with a crowd pleasing ‘space disco’ soundtrack to really bring the parade section to life. It was very important to me that all individuals from HOME felt represented and able to express themselves how they saw fit.

What was the creation process?

The most time consuming creation was building Buzz, which truly became a labour of love. I had such a clear idea of who I wanted this astronaut to be, that it was great to see him come to life step by step almost exactly as I had originally designed.

I made the giant puppet on a willow frame using a material called Plastazote to create the ‘skin’ of the puppet. Having worked with some amazing puppet makers in the past, I was fortunate to have a wealth of expertise to call on for advice when needed. The biggest challenge we faced was how to attach the giant disco ball I’d sourced for the space helmet’s visor. Having only one, there wasn’t any room for error and so when it came to putting it in place, there was a tension in the workshop until it was firmly secure and we were happily able to breath a sign of relief.

I was very lucky to have a wonderful team supporting me in the puppet build, giving me opportunity to share construction ideas and processes. I really couldn’t have completed the project without their dedication and belief. I’m so grateful for the amazing people, friends and family that supported me at all stages throughout the project.

The design for the other visual aspects (the placards and stickers) came from playful pop culture references and continued the space theme further.

We held rehearsals for those wanting to engage with the parade choreography and for the puppeteers to ensure Buzz had a few tricks up his sleeve to please the crowds of Manchester.

How did the parade go?

On the day of the parade we could not have asked for better weather. The sun shone and made the ‘silver space eleganza’ costumes the staff and volunteers had created really sparkle. The parade route itself is said to take an hour to complete, but it flew by in no time at all. As always, the crowds supporting the parade were an amazing motivator, and there were moments (whilst strapped in a three and a half meter tall astronaut) I felt very emotional… At the joy of execution following months of hard work, but also how we were now part of the long legacy of continuing protest for equality by the LGBT+ community. It is said we stand on the shoulders of giants, and I felt we were honouring the likes of Marsha P Johnson and Sylvia Rivera in continuing to carry the torch, stand up and have our voices heard.

I have huge respect for all the HOME staff and volunteers that marched in the parade, with seemingly limitless energy. They danced, smiled and engaged with the cheering crowds, animating the concept and joyfully expressing the message behind the project. It was wonderful to move along the parade route and hear the gasps and cheers from the crowd as Buzz came into view. It’s not everyday the streets of Manchester are graced with a giant astronaut!

When the dust had settled after parade day, I had an excitable telephone call from HOME, sharing that we’d won Best Overall Entry in Parade, inviting us to attend an awards ceremony in Sackville Gardens. This was the icing on the cake for me – the parade day had been wonderful and very rewarding, but to get official recognition for the hard work and vision really meant a lot to me.

What have you been doing over the past twelve months?

The past twelve months have been an absolute rollercoaster. Following the Pride celebrations, I began my Masters Degree at The Royal Academy of Dramatic Arts (RADA) in London, which I continue to undertake. It’s been a privilege to have the opportunity to immerse myself in the creative process at such a world-renowned institution. The Theatre Lab course has continuously challenged and inspired me as an artist and theatre maker, and will continue to inform the work I create when I complete the course this year. Like everyone else in the world, the interruption of COVID-19 has altered the course trajectory. Despite this I’ve continued to work with my fellow RADA cohort online, allowing us to explore performance within a digital context. Meanwhile I’ve been concocting ideas for future projects, with performance pieces in the Bloomsbury Festival later this year, and a final performance at RADA. 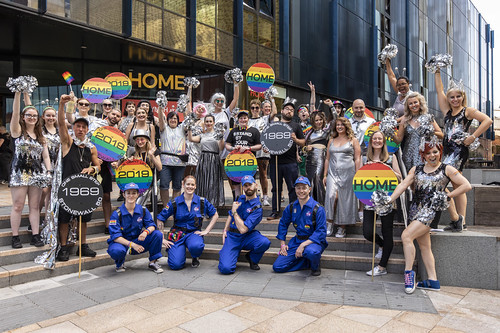