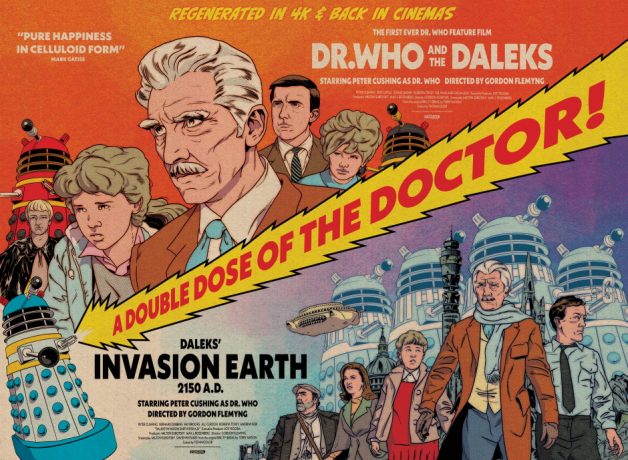 A double dose of the doctor! Two classic Dr. Who adventures return in new 4K restorations.

This event will include a 10-minute intermission between the features.

Dr. Who and The Daleks (U)
Dir Gordon Flemyng/GB 1965/83 mins
Peter Cushing, Roy Castle, Jennie Linden
Travel in the TARDIS to the far-off world of Skaro, where the survivors of an atomic war teeter on the brink of oblivion. Can Dr. Who and his friends save the day? This ripping space adventure showcases the Daleks in full, glorious Technicolor.

Daleks’ Invasion Earth 2150 A.D. (PG)
Dir Gordon Flemyng/GB 1966/84 mins
Peter Cushing, Bernard Cribbins, Ray Brooks
For their second big-screen outing the Daleks are here among us, enslaving humanity in a ruined future London as part of an extraordinary plan to pilot the Earth through space… that is, unless the plucky TARDIS crew can overcome tremendous odds and defeat them.

Event/ This screening will be introduced by Andy Murray, writer, journalist and unashamed geek.